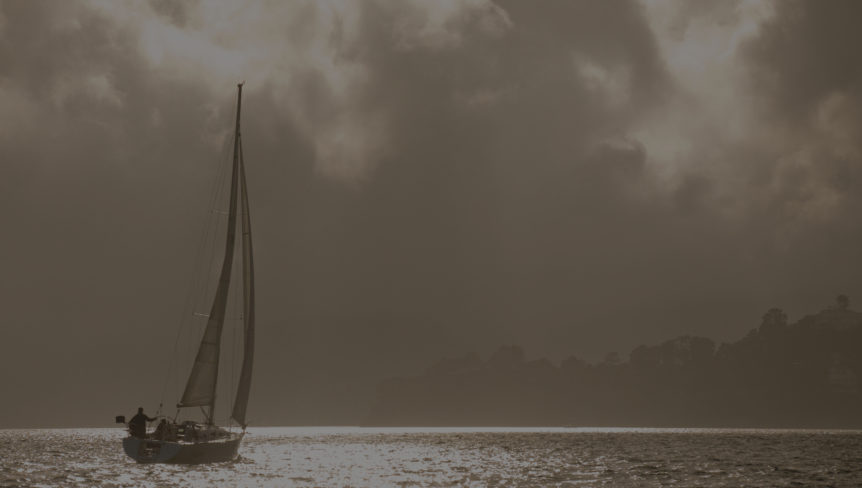 Getting to the next mark or anchorage requires you to recognize shifts (and veers), correct?

Have you recognized the shift in sailmaking?

From Artisanal Craft to Mass Production

The same applies for choosing a sailmaker. When Island Planet founder Dave Benjamin was a kid, buying a new sail entailed a pleasant visit to the local sail loft, where a sailmaker stood pipe in mouth eyeballing a luff curve with lofting batten on an ancient wooden floor. Those days disappeared as sails and boats increased in complexity and sailmaking transitioned from an artisanal craft to mass production.

The first big shift combined advances in sailcloth and using computers to design sails. The pipe clenching sailmaker went from shifting a lofting batten on the loft floor to tapping those changes on a computer keyboard. Sailmakers wanting access to that cutting edge technology banded together in franchise groups. All the names we recognize: Banks Sails, Doyle, Elvstom, Hood Sails, North Sails, Quantum Sail Design, Ullman Sails, Sobstad, UK Sailmakers sprang from the need to combine resources for technology and marketing efforts. Now computers are affordable and the most sophisticated sail design software, such as Smar-Azure and Sail Pack can be purchased for around $10,000. Many former franchise sailmakers have gone independent as a result of technology becoming affordable.

The next big shift was globalization. Like many other industries, sail manufacturing moved overseas to large scale production lofts supervised by experienced western sailmakers. In a Yachting Monthly article, Nigel Calder toured a 200,000 square foot Asian production loft where many brand name sails are made, summing up his visit saying he had “witnessed the globalized future of sailmaking” and describing sailmaking as having “entered the era of established brand names tied to mass production facilities…no different than Nike or Sony.” Calder astutely noted the playing field between large and small sailmakers had been leveled.

The level playing field allowed Island Planet Sails to be the next big shift in how people buy sails. But what really makes Island Planet Sails a decidedly different sailmaker? President and founder Dave Benjamin refined the process of purchasing sails from afar. Customers are able to learn how to properly measure their rig for new sails with videos and unlimited support from the caring staff at Island Planet. Customer involvement with sail design doesn’t stop with measuring. Detailed drawings are supplied and the knowledgeable staff takes time to explain how the and why behind design decisions. If a customer’s requirements were not properly interpreted, the design is re-done until everyone is happy. Due to the sheer volume of sails produced, with nearly 100 in production at time of this writing, prices are surprisingly reasonable. The sails are designed and manufactured without compromise. Growth has been organic, relying on repeat and referral clients, eliminating the need for expensive advertising.

Island Planet Sails will get you to that mark or idyllic anchorage quicker and more economically than you imagined. Request a quote today.

I'm interested in a sail! Please send details and pricing.

I'm interested in a furler! Please send details and pricing

Do you have questions, concerns, or comments for Island Planet Sails? Leave a message below and we will be sure to get back to you as soon as possible.

We publish about six newsletters a year containing company updates and interesting sailing stories from around the world. Sign up below to make sure you don’t miss out.